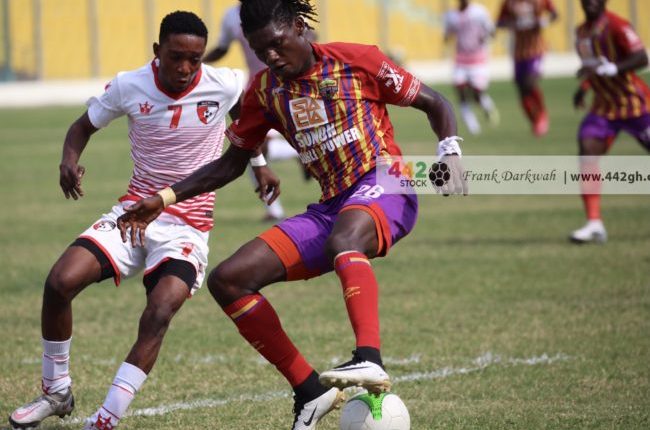 Hearts of Oak marauding full back Raddy Ovouka  is courting interest from an unnamed French outfit, according to sportscorna.com report.

The unnamed French club is willing to dole out US 600,000 to secure the signature of the Congolese defender, who is deemed as the best left full back in the Ghana Premier League this season.

Playing 24 games and notching a solitary goal for the Phobians, Ovouka is incontestably one of the standout players at the capital-based giants and proved why he is matchless in that position during the recent Super Clash against Asante Kotoko, where he bossed his lines both defensively and offensively impressing ex-Chelsea player Christian Atsu and former Villarreal midfielder Mubarak Wakaso.

His standout displays for the Rainbow Club is not only conspicuous to the domestic eyes following his call-up to the Congolese national team, where he impressed in his home country’s Africa Cup Of Nations qualifiers especially against a star-studded Senegal side led by Liverpool attacker Sadio Mane.

The report further revealed that, Hearts of Oak want nothing less than €1.5M for Ovouka Hokemba with the player’s current contract running till 2024.

With three games to spare in the ongoing Ghanaian top-flight, Ovouka will be bent on helping the Phobians bring an end to the twelve-long years wait for a league crown as they prepare to face Ebusua Dwarfs, Liberty Professionals and WAFA.