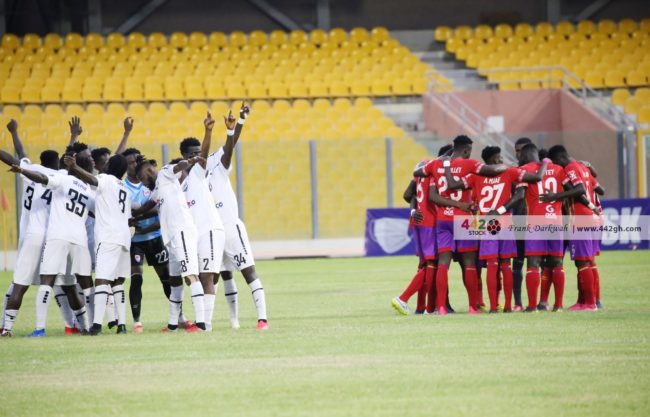 Accra Hearts of Oak have a date with Berekum Chelsea on match day 27 of the Ghana Premier League at the Accra Sports Stadium on Sunday.

The Phobians who have not won a major title since 2009 climbed to the top of the table on Friday after a 1-0 win against Eleven Wonders in Techiman.

Hearts of Oak have not lost a match since their 2-0 loss to Dreams FC on May 2 – having won four matches on the spin – their best winning run in close to a decade.

Check Out Ghana Premier League Clubs And Their Kits Sponsors…

Kwadwo Obeng Jnr scored in the first half to give Hearts all the spoils. The former Wamanafo Mighty Royals (Nea Saalamina) – forward slid home from range after capitalizing on a mistake by Eleven Wonders defender Tetteh Nortey.

Hearts of Oak have lost twice at the Accra stadium (2-0 against Great Olympics) and (1-0 against Inter Allies) – but their performance in recent weeks puts them an urge. Robert Addo Sowah seems to have made the centre back position his own after slotting in for Nuru Sulley who was red carded against Dreams FC at Dawu. His partnership with Mohammed Alhassan has been immaculate – keeping four clean sheets and conceding two goals in their last six matches.

Berekum Chelsea is one of the sides who have yet to win a match on the road – picking only two points – against Legon Cities and Elmina Sharks.

Stephen Amankonah is the clubs top scorer with 10 goals.

The Blues have amassed 31 points and sit 13th in the League table after 26 matches in the Premier League.

The reverse fixture in the first round of the season ended 0-0 at the Accra Sports stadium.

The game which is scheduled for 3pm kick off at the Agyemang Badu I Park will be shown live on StarTimes Adepa channel 247.

In other fixtures, AshantiGold will be at home against Legon Cities at the Len Clay stadium in Obuasi. The Miners will face former coach Bashir Hayford in Sunday’s test. Coach Bash led AshantiGold to their 4th League crown. Legon Cities have been on a resurgence winning two of their last three matches. They are 11th in the table with 32 points.

This match will be live on StarTimes Adepa channel 247.

Dansoman based Liberty Professionals who have moved their home ground to Sogakope will face off with Dreams FC on Saturday.

Bottom placed Inter Allies should avoid defeat on Sunday to keep their chances of survival intact – as they come up against third placed Medeama SC. The mauve and yellows lost 2-1 in their last visit to Dawu when they played Dreams FC in November. The Tarkwa based side have won three, lost two and drawn one in their last six matches and sit third in the table with 43 points.

King Faisal have a fierce test against Eleven Wonders at the Ohene Ameyaw Park in Techiman. Two points separates the two sides – as King Faisal sit in 15th place with 29 points, two points ahead of Eleven Wonders who sit one place below – with 27 points.

WAFA clashes with Ebusua Dwarfs at the Red Bull arena in Sogakope on Sunday.

Finally, Bechem United who lost 2-1 to Dreams FC on match day 26, return home to play Elmina Sharks at the Nana Fosu Gyeabuor Park. Sharks lost 1-0 to King Faisal at home and would aim for a point the fray as hungry lions to devour their opponents. Bechem United’s enviable six year unbeaten home record came crashing on May 12 when they lost 1-0 to Hearts of Oak at Bechem.

Check Out Ghana Premier League Clubs And Their Kits…