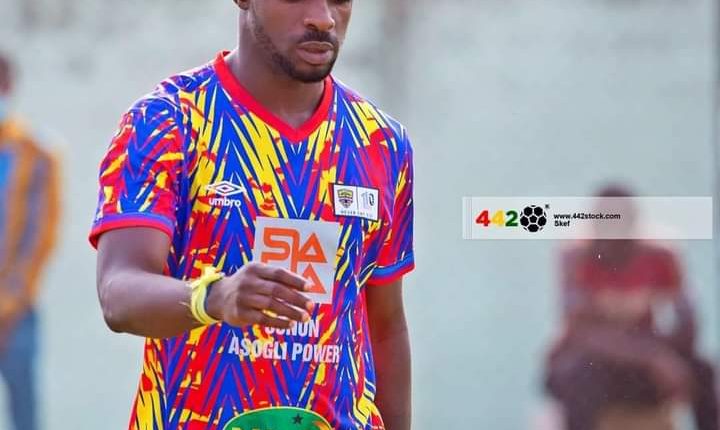 Accra Hearts of Oak misfit Frederick Ansah Botchway has expressed his displeasure over the club’s decision not to terminate his contract mutually after being declared as surplus to requirements.

Management of the Capital-based club announced their decision to part ways with the 25-year-old midfield enforcer two-and-half year stay.

Ansah Botchway has issued an emotional statement over the club’s decision not to abrogate his contract by mutual consent, allowing him to sign for a new club ahead of the 2022/23 season’s campaign.

The 25-year-old in a statement on his social media accounts admitted that he feels very bad over the harsh treatment from the club’s management not to hand him his official release letter to pursue his football career at a different club.

Ansah Botchway joined Hearts of Oak on a three-year deal from Liberty Professionals on a free transfer in 2020.

Below is the official statement from Frederick Ansah Botchway;

I have served Hearts of Oak with all my heart and in sincerity. Everyone at the club especially the fans became a family. Lot of lies and negative propaganda were mounted against me but I decided to remain silent for the respect and love I have for this club but it saddens my heart and soul today, that I have had to do this. Despite being declared surplus to requirement by the club without any official letter to me and my management, I thought it was time for me to move on with my career despite the pains in my heart for the manner in which this was communicated (via social media).

Tried as I have done, the club that has declared me surplus to requirements has still refused to hand over my release letter to me to pursue other opportunities. Neither has the club terminated my agreement after weeks of this publication.

I have never spoken ill about the club on any media but I feel very helpless and sad at this moment.

Currently, I’m not training with Hearts of Oak because I’m officially not part of the team, yet I have not been given my freedom to choose a club of my choice. Today hasn’t been a good day, as I virtually spent hours at the club begging for my release letter but I was told to go home and wait until the club is ready to invite me for my release.

Why am I writing this?

I need to let everyone at Hearts of Oak know that the club is still in my heart after what they have done for me and I’d want our ties to be severed on very professional grounds.

The transfer window is opened and I have decided to search for new opportunities to showcase my talent as well as take care of my family.

If I’m surplus to requirement at Hearts, I expect that communication to come with a release and termination letter.

Sincerely and respectfully I do not need to beg to be left to find new opportunities.

Thank you, Accra Hearts of Oak.