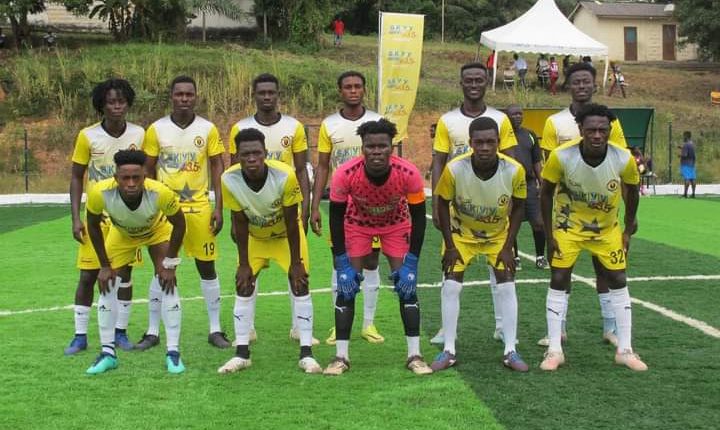 With rich history in Ghana’s football arena, the contributions ok Sekondi Hasaacas and Eleven Wise made Western region a major stakeholder in the game.

One experience face leaving indelible legacies in the Western belt is Hon Wilson Arthur, the owner and financier of Skyy FC. The experience football administrator, who currently chairs the MTN FA Cup committee , inked his name into the history of Western regional football with an historic qualifications of Skyy FC into the National Division One League. The underdogs zoomed their way to the summit of the log at the regional level with an electric speed. To put emphasis on their qualifications, they went the entire division two league season unbeaten with some exciting football to match. The fluidity of their game, readiness to fight until 90 minutes manifested in the enviable positions they finished in each of their Division One League campaigns.

In their maiden season in the National Division One League in 2018/19, Anas 12 truncated the league at a point they were third on the log after 13 matches with same point with second placed team. They raised hopes within Western region as the quest for premier league football drew ever closer.

In their second season the club won the novelty league in their one and was leading the table in the COVID truncated season before finishing second in the full season after.

In the short history of Skyy FC, it was Bibiani Gold Stars that pushed them all the way to the final rounds leaving Skyy FC in the second position in the 2020/2021 season. That position qualified Skyy fc to participate in the maiden edition of Division One Top 8 super Cup competition which Skyy FC deservedly won. In the following season(2021/22) FC Samartex took an early lead and galloped till the end. Skyy FC could not compete and settled for an abysmal 5th place finish.

Skyy FC however made it to the Quater Finals of the MTN FA Cup and got beaten by Accra Hearts of Oak at Accra Sports stadium to exit with pride. In their third competitive season, after beating Ebusua Dwarfs 1:0 at Elmina Dr Nduom Stadium, Skyy FC suffered a false start losing Match Day 2 and 3 away games to New Edubiase at Len Clay stadium and to Nations FC at Dr Kyei Sports Complex all narrowly by 0:1. The Skyy has been the limit to the Eagles of Wassa East from match day 4 to 11 now occupying the apex of the table.

In an exclusive interview with the Club President Hon Wilson Arthur, he revealed that the arrival of Coach Johnson Smith this season has worked good for his team. The Players have so much trust and respect for the former Asante Kototo Coach. Skyy FC is most definitely poised to make it to the Premier league this season.

Is 2022/2023 their the Akyy season? Is premier league football heading back to the Western belt ? Hon Wilson Arthur must be doing something special.

Ghana’s goal monger who was dropped from the World Cup squad scores, assists worldie against Westerlo in the Belgium Pro league