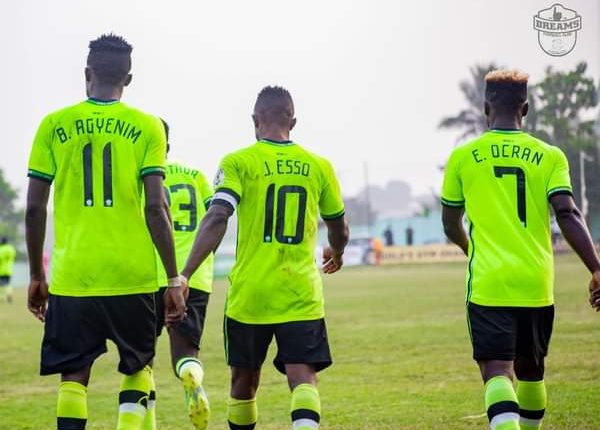 Dreams FC continued their supreme form in 2021 with a 4-2 win against former champions Aduana Stars at the theatre of Dreams to make it three successive wins in the Ghana Premier League.

The Dawu based side finished the month of January without defeat and have gone three games in February without a loss to extend their unbeaten run to eight matches in 2021.

Striker Joseph Esso scored his 6th goal of the season inside 16 minutes by tapping in from close range.

The Still Believe lads were dominant from the blast of the whistle with some intelligent play from the back to the attacking area.

Just after the break, Dreams FC doubled their account from 12 yards through Esso, taking his goal tally to seven in the season.

Striker Agyenim Boateng was tripped in the box and the referee pointed to the spot for a Dreams FC penalty.

Aduana pulled one back not long after the third goal as Bright Adjei connected a ball in the 62nd minute.

Emmanuel Ocran who produced two assists in Techiman against Eleven Wonders made it 4-1 when he hit a strike into the top right corner.

With six minutes of the game remaining, Aduana reduced their deficit through Emmanuel Osei Baffuor to make it 4-2 in favour of the home side.

Dreams FC now sit second in the League standings with 23 points, two adrift leaders Karela United and on same points with Asante Kotoko who have a game in hand.