Political activist and staunch Hearts of Oak fan, Kwame Obeng Asare also known as A-Plus, is confident his club will take over Accra when Hearts of Oak cross swords with Great Olympics in the Ga Mantse Derby this weekend. 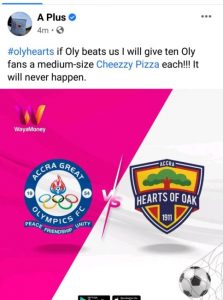 A-Plus exercised his confidence in the Phobians by promising a medium sized ‘Cheezzy Pizza’ for ten Olympics fans should the Dade Boys beat the league leaders.

The White and Blues defeated Hearts of Oak in the first round of the Ghana Premier League and would be looking for the double over their city rivals this Sunday.

The two victory over Hearts led to rancour at the other side of the city which culminated in the sack of Serbian trainer Kosta Papic and ever since then the Phobians have been on an upward trajectory with the arrival of Samuel Boadu, who has led the Rainbow Club to a five-game winning run.

The much anticipated game will lose a little bit of gloss should Olympics kingpin Gladson Awako miss the game – following his call-up to the senior men’s national team – however his absence alongside Samuel Ashie Quaye would tilt the game in favour of the league leaders.