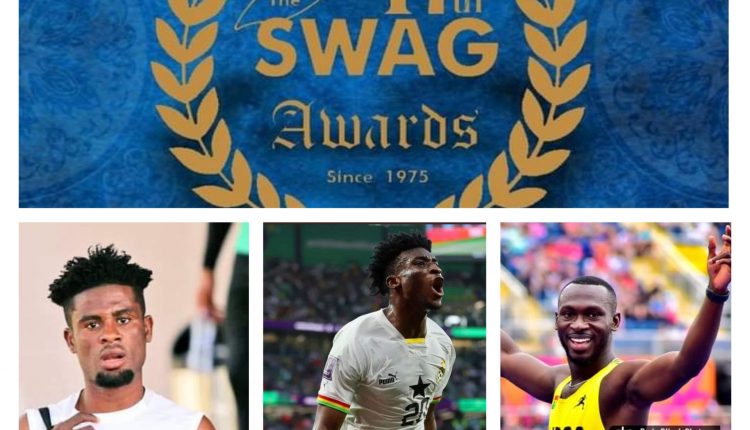 Ghana’s leading sporting personalities are expected to converge at the Accra International Conference Center where the glamorous 47th SWAG Awards ceremony would be staged.

The 47th edition of the SWAG Awards, which take place on Saturday, January 28, 2023, have Joseph Paul Amoah, Dede Ayew, Mohammed Kudus, and Arsenal star Thomas Partey all in contention for top gongs.

Hearts of Oak attacker Daniel Afriyie Barnieh is in the running to retain the Home-based Footballer Award of the Year – an award he won at last year’ event. However, he would have ex-AshantiGold forward Yaw Annor and Asante Kotoko goalkeeper Danlad Ibrahim to beat.

SWAG Top Sports Performers for 2022 announced ahead of its…

In last year’s edition, Tokyo 2020 Olympic Games medalist Samuel Takyi bagged the Sports Personality of the Year and Amateur Boxer of the Year awards. Meanwhile, the 22-year-old is absent from this year’s list of nominees which means a new champion would be crowned on the big night in Accra.

In last year’s edition, Tokyo 2020 Olympic Games medalist Samuel Takyi bagged the Sports Personality of the Year and Amateur Boxer of the Year awards. Meanwhile, the 22-year-old is absent from this year’s list of nominees which means a new champion would be crowned on the big night in Accra.

The race is, even more, hottest for the Athlete of the Year award with top guns Benjamin Azamati and Joseph Paul Amoah in an open contest for the prize.

In the female category, Tripler jumper Abigail Kwarteng and USA-based Deborah Acquah along with high jumper Rose Yeboah are all gunning for the big award. Kwarteng (triple jumper) and Acquah (long jumper) who both competed at the 2022 Commonwealth Games in Birmingham, UK are in pole positions for the accolade. But, home-based Rose Yeboah boasts of a rich voting constituency that has been left impressed with her delivery. Yeboah, who won the Prospect of the Year Award at the 2019 edition and won Gold for Ghana during the 2022 Africa Athletics Championship, would be hoping to mount the podium once more.

Police Officer Grace Mintah has been nominated for the Female Armwrestler of the Year Award.

During the launch of the awards, the Sports Writers Association of Ghana, SWAG, announced the criteria for nominations for the 47th Awards back in August 2022.

Ghana’s Vice President, Dr. Mahamudu Bawumia, has pledged his support for the longest-running awards scheme in the country. The former Buckingham University student has already provided cash support of GHS50,000 to the awards with GHS10,000 each going to the Sports Journalist and Female footballer of the Year categories.

The awards recognizes, rewards and honours outstanding achievements of deserving Ghanaian sportsmen, sportswomen, teams and officials in various disciplines (i.e. the crème de la crème persons, who bring glory and honour to themselves and the nation).

It also recognises the contribution of individuals and organisations that contribute positively to the development and promotion of Ghana’s sports. It is also a platform for interaction between these sports stars and influential members of society, for stocktaking and agenda-setting, to accelerate Ghana’s sports development.

Women’s FA Cup Score Board: Detailed Results On All Round 64 Matches Played

GES and RLFG to introduce rugby league in Ghana schools

SWAG Top Sports Performers for 2022 announced ahead of…