A Journalist with Oyerepa FM/TV, Seidu Alhassan popularly called Zakito claimed the coach got it wrong with his statement, after about 13 Muslim players of the Porcupine Warriors had requested the Portuguese gaffer to relaxed his training schedule.

The fasting is one of the five pillars of Islam where Muslims around the world are expected to abstain from food and drink during daylight hours in the Holy month of Ramadan.

Kotoko: Expect the best from me- Francis Andy Kumi

Ghsportnews.com understands that Barreto is unhappy with the allegations and wants to take action because he feels such reports and publications can dent his image in the future.

Addressing this issue on Facebook, David Obeng Nyarko called the latest development as fake news to distract and bring down the progress of the Kotoko team. 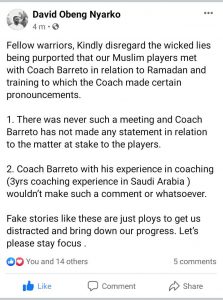 Mariano Barreto has started his Kotoko tenure on a good noted after two wins and a draw in three Ghana Premier League games.

The Fabulous lads who are top of the league log next play 2nd placed Accra Great Olympics at the Accra Stadium on Friday, April 16, 2021.

Kotoko: Expect the best from me- Francis Andy Kumi