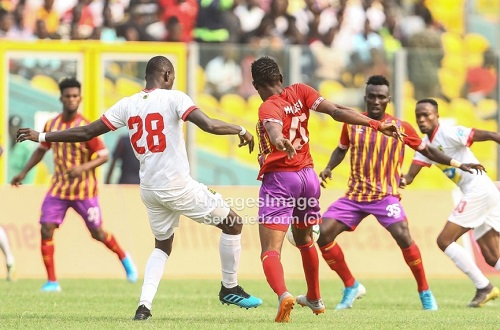 Asante Kotoko vs Hearts of Oak has been the biggest match in the Ghana Premier League calendar for decades and with good reason.

Both teams have achieved huge success on the domestic front, sharing 42 league titles between them since 1958.

The fixture has earned the moniker, ‘Super Clash’ and it usually bears witness to goals, flair, and controversy.

On Sunday these two sides will meet for the first time this season at the Accra Sports Stadium. Joy Sports’ Owuraku Ampofo and Bill Eshun preview the spectacle having spent ample time following the two giants.

Owuraku has been based in Accra keeping tabs on the Phobians whereas Bill has been monitoring the Porcupine Warriors.

Road to the clash
Asante Kotoko

Kotoko are going into the match on the back of a massive 2-0 victory over Karela United in Aiyinase.

The Porcupines started their campaign slowly but turned things around after losing 1-0 to Great Olympics on matchday 3.

Maxwell Konadu was shown the door shortly after that embarrassing defeat with Johnson Smith taking over as interim coach.

Under the guidance of Smith, the Kumasi-based outfit recorded five victories in nine games, equivalent to a total of 18 points from a possible 27.

Despite the recent appointment of Abdul Gazale for the head coach role, the former Karela United boss remains in the club as an assistant and plays a key function.

They are now five points off table toppers Karela with three games in hand. A win against their bitter rivals will move them closer to the summit.

Hearts go into this tie on the back of a 1-0 victory over Liberty Professionals in Dansoman.

The Phobians experienced a slow start to the campaign, failing to win any of their first three matches.

But, the arrival of Kosta Papic somewhat changed the dynamic.

He led the club to four victories in his first eight games before experiencing poor results, leading to his resignation.

Samuel Nii Noi is handling the club on interim basis and has led his men to two straight victories.

They are also five points off the top of the table and a win on Sunday will boost their title hopes.

Gazale was appointed head coach of the Porcupines after Kotoko’s big victory over Karela United in early February.

It meant the relegation of Johnson Smith to assistant coach which surprised fans but was understood as Smith does not possess the CAF A license, the minimum requirement to be a head coach for a Ghana Premier League team.

Gazale is yet to manage the club in a domestic game. He did however, lead the side in the playoff round of the CAF Confederation cup which ended in a 2-1 aggregate loss in favour of Algerian side ES Setif.

Gazale attained his CAF A license in February 2016, the same period as former Medeama coach Samuel Boadu, and Liberty Professionals boss David Ocloo among others.

A convincing victory over Hearts of Oak will gain the fans’ trust in his abilities.

Nii Noi took over from Kosta Papic after his shock resignation.

The Accra-based side were going through a difficult period off the pitch with the head coach, assistant coach and goalkeepers coach all leaving in a space of a week.

Also on the pitch, the Phobians had failed to pick a win in four games.

Despite this, Noi has steadied the ship with two straight victories albeit both were laboured.

Noi does not have a CAF license A qualification which rules him out of a permanent head coach role.

However, he will aim to go out with his head held high.

Patrick Asmah returned to full training earlier in the week after suffering an injury in a matchday 10 clash against Aduana Stars.

Kwame Opoku was set to serve his one game suspension if he had received a booking in the Bechem United game. However, that game was called off due to heavy rainfall so Opoku will be available for the Super Clash.

Mamane Lawali is currently suffering from anterior cruciate ligament (ACL) on his right knee and is unavailable for the game.

The same can be said for Abdul Nurudeen and Daniel Yeboah who have knee and ankle injuries respectively.

Enoch Addo, who has pain in his left ankle is a doubt for the game.

Head-to-head
The two teams have met 106 times since 1958 with Hearts winning 36 games and Kotoko winning 35. 35 draws have been recorded so far.

Since the 2018 and 2019/20 seasons were cancelled, results in those campaigns were not included in the statistic above.

Asante Kotoko have won the Ghana league title on 23 occasions since the competition started in 1958.

Asante Kotoko worse performance in the Ghana league since 1958 is 11th out of the 15-club league in the 1970 season.

Ghana FA introduces another Competition For Division One League Clubs