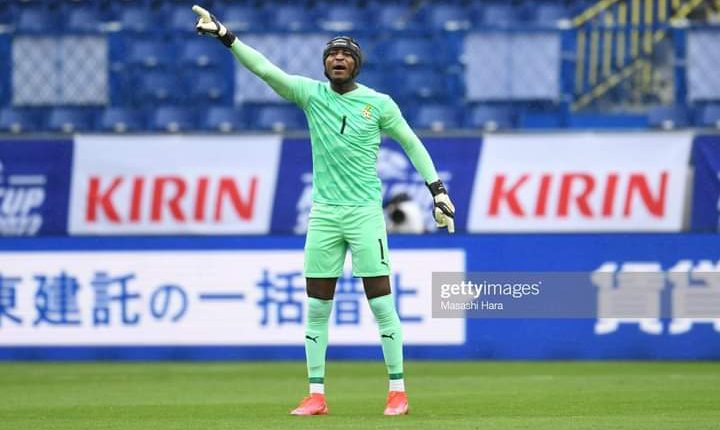 Goalkeeper Abdul Manaf turn hero of the day for Ghana as they beat Chile in the ongoing Kirin Cup for Japan on penalties.

After playing the full 90 minutes plus extra time, both Ghana and Chile no get any goal.

Ghana however suffer setback when in the 65th minute, A. Asiedu collect red card bringing dem to 10 men against 11 for Chile.

As if that no be enough, Mubarak Wakaso chop second yellow card in de 78th minute of the game.

This bring the Black Stars team to 9 men against 11.

The Black Stars however hold the game, manage neutralize the offense of dia opponent, Chile until full time with just nine men.

The game proceed to penalty shootout where the unexpected happen.

Ghana on the other hand score all dia three spot kicks, giving them much deserved win.

This win by the Black Stars mean will return home with 3rd place position after they beat the South American side.

This win with only nine players by de Black Stars be major boost to dia morale after they suffer heavy defeat to Japan in dia previous game.

Black Stars suffer their first defeat under leadership of the new coach Otto Addo after Japan trash dem by four goals to one.

The first two games of the Black Stars ahead of de World Cup Qualifiers against Nigeria end in draws.

But this be enough for the Black Stars to book their place in the tournament ahead of Nigeria.

Ghana secure their first victory under new management by defeating Madagascar by 3 goals to nil.

However in the next game against Central African Republic they play 1-1 draw.

Black Stars lose their exciting form ahead of de Japan international friendly after most of the top players miss the match over injury, health issues den different personal reasons.

The latest win against Chile with just nine men and performance of the Ghanaian goalkeeper dey excite more football fans who feel say he be new discovery for de National team.

‘I want to hold the Champions League trophy, go and win it for me’ – Otumfuo urges Kotoko team