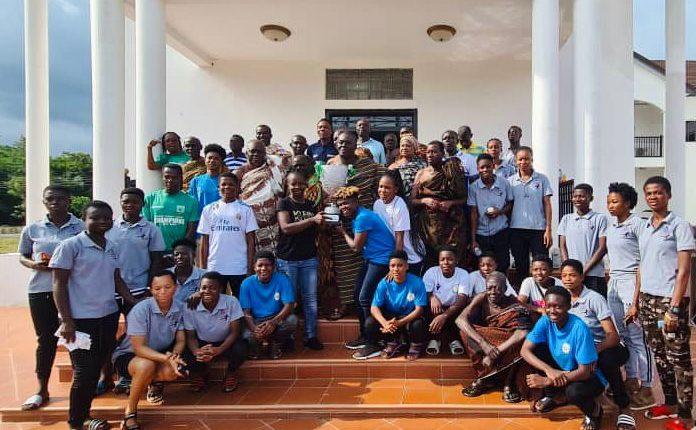 Osagyefo Oseadeyo Agyemang Badu II, welcomed the entire delegation made up of the playing body, technical team and the President and Bankroller, Nana Opoku Fosu Gyeabour II, Koasehene and Manhwerehene of the Techiman traditional Council and congratulated the team for shaking off opposition from former champions, Hasaacas Ladies and the winning the enviable league title.

He intimated all natives of Dormaa and Techiman are one people (Bono Enclave) and on a special visit as such will entreat the team to go all out and conquer Africa.

A cash reward of ten thousand Ghana cedis (GHS10,0000) was presented to the team for winning the league whiles pledging to support the team financially and morally during the Africa campaign.

Speaking on behave of the team, Nana Opoku Fosu Gyeabour II expressed gratitude to the paramount Chief of the Dormaa traditional area, Osagyefo Oseadeyo Agyemang Badu II for the warm reception and also for promising to support the Africa campaign saying the team will make Ghana and the Bono enclave proud.

Ampem Darkoa ladies ended the dominance of Hasaacas Ladies by snatching away the 2021/2022 Women’s Premier League title and thus will be representing Ghana in the CAF Women’s Champions League WAFU B Qualifiers.