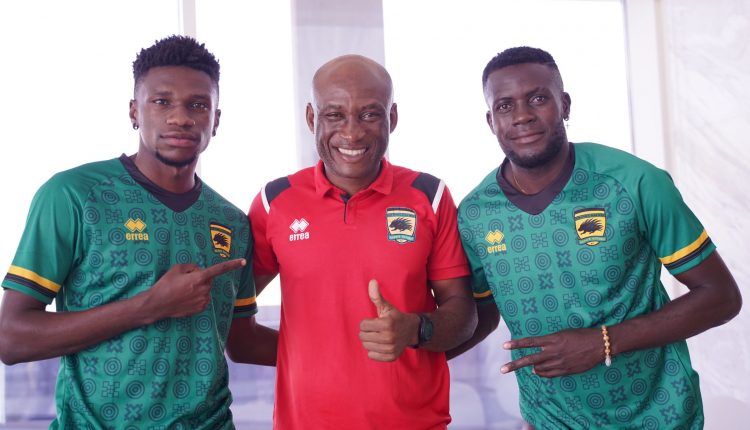 Asante Kotoko’s new signings Mfegue Georges Omgba and Mbella Etouga Franck have arrived Dubai and linked up with the rest of their team mates currently in the golf country for pre-season.

The Cameroonian attackers who signed three-year contracts earlier this week with the Porcupine Warriors traveled via a RwandAir Airbus on Saturday and arrived this morning.

Mfegue and Mbella will join the rest of their Club colleagues in pre-season training and friendlies in Dubai next week.

24-year old Mfegue, former Intermediate and current Under-23 Lions of Cameroon International who earned International recognition into both National selections within the past 24 months is expected to sparkle in Ghana.

Noted for his speed, power and exquisite finishing ability in the final third, Mfegue who scored 26 goals plus provide 29 assists all-together for Avion Academy in the Top-flight Championship during a three year stint with the club in the time.

Etouga was a part of the Cameroon team that participated and reached the quarter-final of the 2021 Under-20 African cup of Nations Tournament in Mauritania in January.

The multiple nominee for the VAR award also helped Cameroon win the 2020 Zonal tournament – UNIFFAC in December 2020 in Equatorial Guinea, scoring a goal and assisting once in the process.

The Porcupine Warriors will get their campaign underway with away at Dawu to lock horns with Dreams FC before returning home to host Bechem United in matchday Two of the next Ghana Premier League season.

Meet Edward Agyeman Duah: The ONLY Ghanaian Footballer To Have Played In THREE CAF CL Finals With Three Different Clubs