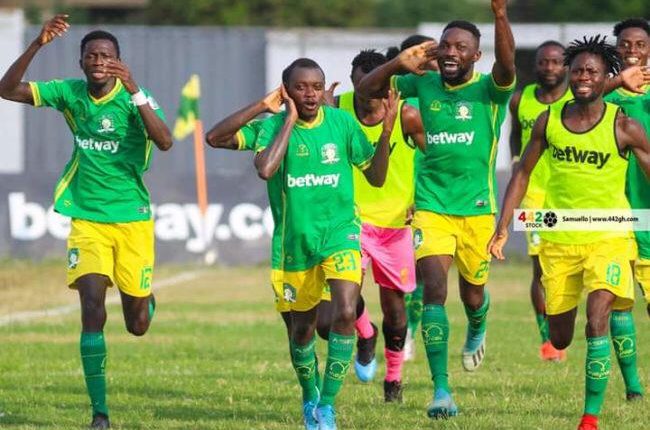 Asante Kotoko come from behind to defeat Ebusua Dwarfs 2-1 in the ongoing Ghana Premier League Matchday 24 at the Obuasi Len Clay sports Stadium.

The Porcupines made it three successive wins in the Premier League, having beaten Legon Cities at and Dreams FC last weekend at the same venue.

Kotoko fell behind in the 24th-minute as Daniel Korsah delivered a long-range shot from a free-kick to beat goalkeeper Razak Abalora.

The victory stretches Asante Kotoko’s lead at the top to 44 points, four points above second-placed Hearts of Oak on the league table.

Elmina Sharks shared the spoils with Inter Allies after after Benjamin Boabeng scored in the 72nd minutes to cancel Reginald Antwi’s first half strike.

Elsewhere at Tarkwa, WAFA recorded yet another away win as they came from a goal down to beat Medeama SC 2-1 at the Akoon Park to register their second successive away win.

Hearts of Oak beat Bechem United by a goal to nil at the Fosu Gyeabour park.

In Accra, Aduana Stars produced a great comeback in Accra, coming from a 2 goal down to beat Wonder club Accra Great Olympics by 3-2 in the last of the round of 24 Ghana Premier League game played at the Accra Sports Stadium.

And finally, Berekum Chelsea secured a vital 3-1 victory at home against AshantiGold SC.

2021 MTN FA Cup Preliminary round Kicks off Today Friday, May 14 at match venues across the Country