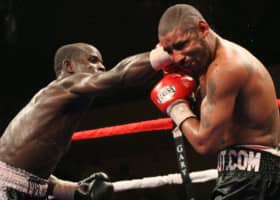 On this day 7 April 2007(Exactly 14 years ago today) Joshua Clottey completely dominated Diego Corrales, knocking down the former world champion twice in a unanimous decision in their 10-round welterweight bout.

It was too much, too soon for Diego “Chico” Corrales. Attempting to move up two weight classes against a dangerous, world-ranked, full-fledged welterweight, the three-time world champion was battered and beaten up by Joshua Clottey, who scored two knockdowns en route to registering a clear-cut, dominant 10-round unanimous decision.

It was an exciting, albeit one-sided slugfest from the outset. As expected, there was little dancing or posing and the boxers performed with as much determination and courageousness as any one could expect. Both stood their ground on the inside and connected with their best shots

Seemingly as fresh late as he was early, Clottey scored one knockdown in the ninth and another in the 10th en route to triumphing by 100-87, 98-89 and 97-90. Corrales had a point deducted in the 10th for spitting out his mouthpiece after going down. His mouthpiece also came out after the initial knockdown.

“Corrales was tough and this was not an easy fight,” said Clottey, the World Boxing Organization (WBO) No. 4 contender, who broke Corrales’ jaw in the middle rounds, rocked and staggered him throughout with pin-point combinations to the chin and cut him over the right eye in the later sessions.

“I expected a hard fight and that is what I got,’’ Clottey continued. “But I knew from the beginning that I had him, that if I fought my fight I would wear him down. This is a huge win. I am very happy. I got an opportunity and I was able to make the best of it. This puts me right where I want to be.’’

Clottey was coming off a close decision loss to WBO welterweight champion Antonio Margarito in a bout Dec. 2, 2006, in which he re-injured his left hand.

“My hands did not give me any trouble tonight,” Clottey said.

Corrales, a world champion at 135 pounds and two-time world champ at 130, has always readily accepted any and all challenges, so he knew going in he was taking a major risk.

“I do not think I made a bad decision because I was able to fight the kind of fight that I wanted, which was on the inside,” he said. “I was hurting him with body shots. I think my jaw was broken in the fifth round. My corner asked me if I wanted to keep fighting and I said yes.

“My main concern now is getting the jaw fixed. Once that it is taken care of, I am going to sit down with my team and decide if I want to stay at 147 or go down to 140.

“Clottey deserves credit. He caught me with a couple of great shots.’’