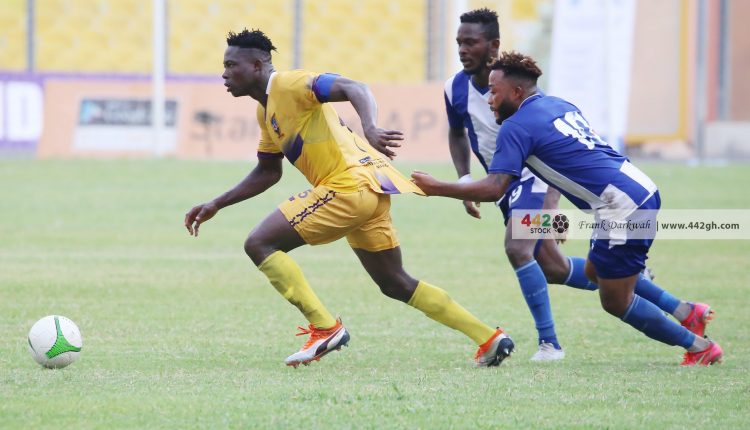 Accra Great Olympics secured a win over Medeama SC in their opening match of the Ghana Premier League second round courtesy a first half strike by Samuel Ashie-Quaye.

Ashie-Quaye scored after the half-hour mark to help his side to victory over the much fancied Medeama; a result that sends Olympics top of the table albeit the rest of the teams in contention are yet to play their games.

The Dade Boys welcomed their opponents to the Accra Sports Stadium on Friday for the first game of the weekend. This marked the first time a league match was been played following a 4 weeks break.

With both sides adding new players to their squads, they all approached the game with the mentality of starting with a positive result.

Olympics however were more determined to continue where they left off after an impressive first round campaign.

Back from making his senior national team debut, Gladson Awako led the home side as captain while fellow Black Stars squad member for the recent AFCON qualifiers against South Africa and Sao Tome, Eric Ofori Antwi started as skipper for the away side.

After an exciting first 30 minutes, Medeama were dealt a casualty as goalkeeper Ofori Antwi had to leave the game due to injury. His place was taken by the reserve Goalie Frank Boateng.

6 minutes after his withdrawal, Medeama SC conceded the first and only game of the goal with the striker coming from full back Samuel Ashie-Quaye.

Try as they did the away side failed to claw back into the game, handing a win to Great Olympics.

Victory means, they climb top of the Premier League table on 33 points, 2 more than now second-placed Karela United (who have a game in hand).

Medeama after this result, slip once again in their pursuit of breaking into the Top 4. The Mauves and Yellow are still stuck on 27 points and lie 5th. Their position could however be in danger following happenings of the other matches to be played subsequently.